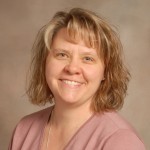 Libby Brunette is the Educational Director of The Applewood Learning Center.  She began her career in Early Care and Education in 1990.  Beginning as a caregiver in an afterschool program, she realized early on that her calling was working with young children.  While studying for her bachelor’s degree in Child and Family Studies at UNH, Libby worked with at-risk youth in a grant-funded, after school program in Manchester.

Upon graduation, she began at Applewood in the Schoolage program.  During her time at Applewood, Libby has served as a Schoolage, Kindergarten, and Toddler Teacher.  In 2000, she took on the role of Director at Applewood where she was provided the opportunity to have a greater impact on children and families.  During this time, she earned her master’s degree in Early Childhood Education from Wheelock College.

Children’s over-exposure to media and marketing, attachment parenting, and emergent curriculum are just some of the passions that keep Libby enthused about the field of early care and education.  She lives in Londonderry with her husband, Chris and two daughters, Evie and Milly.  As a native of New Hampshire, Libby understands the culture of the area while respecting and valuing the diversity of our ever-changing community.